On October 15, 2011, the 110th China Import and Export Commodities Fair was grandly opened at the Guangzhou International Convention and Exhibition Center. As a leading company in China's wheel industry, Zhengxing Wheel Group brought a series of 23 products to its high-profile debut. Its â€œChinese Redâ€ modern fashion booth and new stone arch wheels have become a highlight of this year's Canton Fair. It is reported that this session of the Canton Fair has issued invitations to about 1 million merchants, especially the emerging market buyers represented by the BRICS countries. The willingness to attend the meeting is very strong. At the same time, the United States, Canada, Switzerland, Denmark, France, the United Kingdom and other traditional developed markets Buyers also expressed strong purchasing targets.

At this year's Canton Fair, Zhengxing Group exhibited 23 kinds of wheels. The main products are tubeless, tubeless and engineering vehicle series wheels, including the supporting wheels for Hino and Toyota Coster. At the same time, only the three-petal products that Zhengxing can produce, and the new-style stone arch wheels that can best represent the characteristics of Zhengxing Technologies have also made a high-profile appearance at the exhibition, demonstrating the development and application of the new technology and new technology of the Zhengxing Group. Always adhere to the "I have no people, I have excellent people," the sense of innovation. 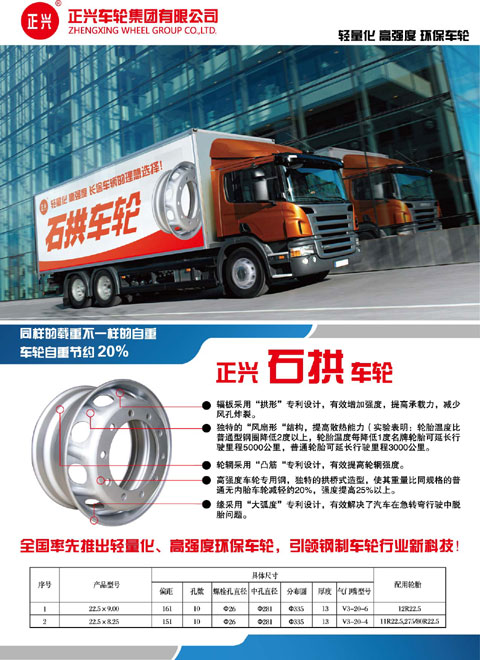 In recent years, with the continuous increase in the number of vehicle ownership in China and the rapid development of the transportation industry, the state has also continuously strengthened the management of over-limit and overload transportation, especially after the â€œRegulations on Highway Safety Protectionâ€ was formally implemented on July 1 this year. Many provinces have implemented standard transportation, which has further curbed the phenomenon of over-limitation and overloading. At the same time, however, it has also inevitably increased the cost of logistics and transportation, resulting in the dismal operation of many transport operators. In this situation, wheel products that simply pursue high-strength, ultra-strong load capacity have been unable to meet the needs of market development, and lightweighting has become a brand-new concept for the development of the automotive and parts industries.

In this market background, Zhengxing Group gave full play to the wisdom of technical personnel, and sought inspiration from the Zhaozhou Bridge which has been standing for more than 1,400 years, and designed and developed the stone arched wheels based on the scientific principle of stress energy consumption (stress). The combination of high strength and light weight has become a successful model for the development of lightweight vehicles. It is understood that the stone arch wheel uses high-strength wheel steel, its unique arch bridge shape, saving 15% of product weight, while increasing the strength of more than 10%. The series of products exhibited in this exhibition are only representative of the Zhengxing series. Currently, the Zhengxing series of lightweight, high-strength, and stable quality wheels are sought after by the majority of truck drivers, resulting in the sales of the Zhengxing-Wheel AM market. In the off-season, the situation is not thin and stable.

It is reported that Zhengxing Group was established in June 2003. It specializes in the R&D, production and sales of automobile wheels. The products are mainly made of steel wheels of various models, and the series has more than 230 series. The annual production capacity of the wheels has reached 14 million sets. . In addition to Wuzhou Base, Zhengxing Group also has production bases in Langfang, Hebei, Chengdu, Sichuan, Hefei, Anhui, and Benxi, Liaoning. The marketing network covers 31 provinces, municipalities, and autonomous regions across the country, and has more than 4,600 sales outlets. It is sold in more than 30 countries and regions such as Japan, South Korea, India, and the United States, and is supporting more than 80 large and medium-sized automobile manufacturers at home and abroad, ranking first in the wheel industry in China.
Zhengxing Group successfully landed on the US stock exchange market on May 12th, Beijing time, and its securities trading code was â€œZXâ€, becoming the second Chinese company listed on the NYSE IPO since Yuchai International was listed on the New York Stock Exchange in 1994. Auto parts companies are also the first private companies in the Chinese auto industry to be listed on the NYSE IPO. After the company's successful issuance and listing, Mr. Lai Jianhui, Chairman and CEO of Zhengxing Wheel Group, stated: â€œThrough listing, we will accelerate the pace of overseas expansion and strive to become the most influential wheel brand for the wheels of commercial vehicles in the world.â€

As an important platform for Chinaâ€™s foreign trade and even the worldâ€™s economic trade, the Canton Fair coincides with the Zhengxing Groupâ€™s globalization strategy. Zhengxing will continue to enhance the core competitiveness of its corporate brand, seize the international market, and establish a world-class wheel enterprise.